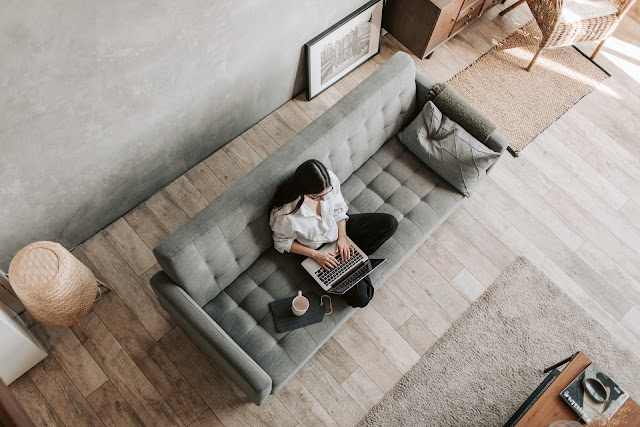 The interview must remain the most widely used assessment strategy in selection.

Work psychology has studied interviews, methodological variations and their effects for a long time. When I was an MSc student back in the late 90s Robert Dipboye’s studies on structured Vs unstructured interviews (e.g. Dipboye, R.L. 1994) were standard texts. In other areas of assessment, some of the bigger changes during my career have been around the growing practice of distance-based assessment.


The Rise of Remote Assessments

Technology and the internet have enabled distance based learning and assessment, bringing benefits including longer reach extending applicant pools, improved speed of hire and greater flexibility with cost efficiencies. Of course, distance-based assessment is receiving a lot of attention right now because of the current enforced dislocation from our usual workplaces for many. However, distance-based assessment isn’t just a feature of the current crisis; it has been evolving for some time and has now reached interviewing too.

In this article, we’ll define what distance-based interviewing is, and discuss how it is being used.  We’ll explore questions around whether these methods are for the convenience and cost-benefit of the organisation, or if they represent an improvement in practice.  If we plan to use such methods in future, we should understand the pros and cons to ensure we reap any available benefits and avoid possible pitfalls.  We’ll also show you how to be effective with video interviewing using Podium365.

Video interviewing within Podium365 can be combined with any other exercise to formulate as a rounded assessment strategy.

What is Video Interviewing?

Of course, to some extent, it does what it says on the tin.  But, it’s not just an interview exactly as we’re used to but via Skype and webcams.  A variation of video interviewing which offers greatest flexibility is what is being referred to in the literature as ‘asynchronous interviewing’; you can use that term in Google Scholar, for example, if you want to extend your reading on this topic. As the ‘asynchronous’ term suggests, the questioning from the interviewer doesn’t happen at the same time as the engagement and responding of the interviewee. 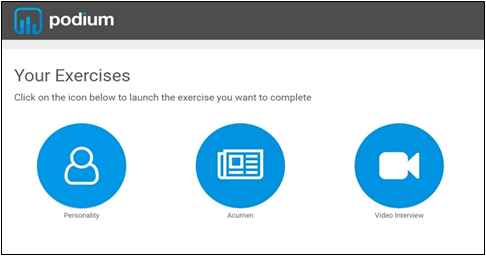 Build your video interview. You create your own questions and define candidate preparation time allowed.  This enables your candidates time to read the question and plan their responses before answering.  You can also specify a maximum answer response length per question.

Send the invitation and await completion.  Your Podium365 system will tell you when that has happened.  Once your candidates complete recording their interview, you can view their submitted responses directly from your Podium account. From there you can add notes about each answer and provide scores for their responses. Once done you can rank order your candidates’ interview performance and combine interview scores with other assessment data in any way you wish.  We show an example screen here illustrating how the user views each question response, adds comments and scoring. 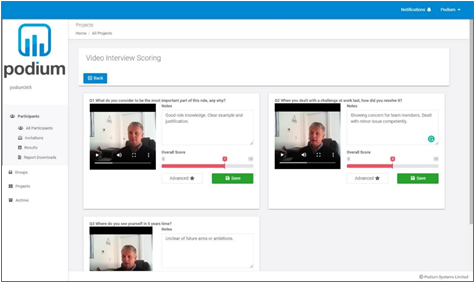 This system is now available in all regions and allows you to create simple, fast and effective Q&A sessions for your candidates, enabling you to ask detailed questions and record candidate responses. In any situation where face-to-face interviewing is not possible, especially now whilst people are working from home, video interviewing allows you to continue your recruitment process remotely.
The system will work across multiple devices. Candidates can choose to use their desktop/laptop browser with an attached webcam, alternatively, they may choose to use the dedicated iPhone or Android app to complete their interviews.

Create simple, fast and effective Q&A sessions for your candidates, enabling you to ask detailed questions and record candidate responses.

Having gained some insight into what is possible, let’s return to the questions about the pros and cons.  Is this merely a cost-cutting convenient process short cut for the hiring company or does it bring something to all stakeholders?  A key question then is, do or will job applicants accept this methodology?

Brenner, Ortner and Fay (2016) undertook a study with one hundred and six volunteers who all undertook asynchronous video interviews alongside a range of other assessments including personally.  Their primary objective was to understand applicant attitudes and variables which might influence those attitudes.  They drew on the Technological Acceptance literature which they cite as research which  addresses “what causes people to use or to reject information technology.”  Further, they designed their method within a framework of The Theory of Planned Behaviour which asserts behavioural intentions (e.g. meaningful engagement with asynchronous interviews) are influenced by attitudes about the likelihood that the behaviour will have the expected outcome and their subjective evaluation of the risks and benefits of that outcome.

Their study noted a number of variables important in influencing those attitudes towards acceptance of asynchronous interview technology.  These included:


Brenner at al also looked at if age and gender influenced acceptance as well as if individual differences in personality, as measured by the Big Five, had an effect. It might be assumed that the millennial generation who are colloquially quoted as being more tech-savvy would more readily accept new technologies.  In fact, Brenner et al found no effect for age or gender; the technology was equally accepted by all. They did note a small effect for personality; there was slightly greater acceptance from those with higher Openness to Experience scores, who tended to report greater perceptions of usefulness.

It might be assumed that the millennial generation who are colloquially quoted as being more tech-savvy would more readily accept new technologies.

The unusual circumstances of our current working environment have made us focus on assessment strategies which we’ve perhaps not embraced so widely before.  That is not to say they are wholly new strategies.  Because these have been brought to our attention, we now know what asynchronous video interviewing is.  We know there is substantive research into its acceptability to the target audience and that it is not just about the convenience it brings the user.

Candidates like video interviewing for the reasons we reviewed.  It's perceived positively as innovative and is acceptable across demographic groups. What is more, it is seen to enhance perceptions of fairness.  It is consistent and standardised.  As Dipboye (1994) pointed out, structured interviews have greater reliability.  Ease of use is also seen as important and is beneficial.  The Podium Video Interviewing option takes that ease to a new level.  You can use Video Interviewing as easily as any of our suite of assessments.  And as our system can integrate with your ATS or similar, you could easily make video interviewing a seamless part of your assessment strategy.

Please feel free to get in touch if you would like a demonstration through your Podium Partner or using the contact form on our website at www.podium365.com